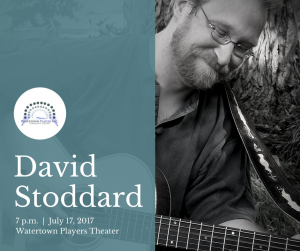 David Stoddard, noted lyricist and composer, will perform a special concert at The Watertown Players Theater on Sunday, July 16, at 7:00 pm. The theater is located within The Market, 210 S Water St, Watertown. Tickets for this one night only event are $24 and will be available at Piggly Wiggly and on-line at brownpapertickets.com beginning June 29.

Stoddard is a Green Bay native but spent many years living in Beaver Dam where he began a career in songwriting. His compositions have brought top songwriting honors from across the US, including folk festivals in Tucson, South Florida, Minnesota, and the venerable Kerrville Folk Festival in Kerrville, Texas. He has also performed at Wisconsin’s largest folk festivals, including Madison, Green Bay, Shawano, and the Great River Folk Festival in LaCrosse. Stoddard also has ties to Watertown as a former member of the 1st Congregational UCC. He has composed hundreds of songs for his own live performances and recordings and for musicals performed by the Hilltop Players of the 1st Congregational UCC in collaboration with Steve & Dee Savides. Stoddard is currently enjoying a multi-faceted musical career as a songwriter, touring sideman, educator, DJ, and promoter of independent music. He tours throughout the US and Canada.

About the Author: Gabe Wollenburg

Gabe Wollenburg is a director on the Watertown Players Board. He has starred in several Watertown Players productions, including "Wicked Watertown," "A Family Reunion to Die For," and "The Impressive Waiter" in Hello Dolly. He also produced and co-directed the 2016 children's theater production of "A Wizard of Oz Christmas."

Supporting your favorite theatre company with an annual donation is more valuable than you think! The Watertown Players is a registered 501(c)(3) not-for-profit. And, boy howdy, are they ever!
Your donation helps us with things like keeping the lights on from month to month while providing a place for the community to enjoy the arts! Reach out and let us know if you’d like to make a donation by filling out this form or calling 920-306-4364. Thank you in advance for your kind generosity.